The Brotherhood of the Passion

The Brotherhood of the Passion appears in Holy Week of 1941, when its first Regulations were approved in January of that year. During all this time it has always had like seat the church of Saint Vincent Martyr of Abando. In 1960, it merged with the Brotherhood of the Palms, also housed in the same church. It is the second oldest Brotherhood, the first to sign a Charter of Brotherhood with the oldest. It organizes three processions, the “Virgin of Sorrows” at the evening of Passion Friday, the “Little Donkey” (Christ entering Jerusalem) on the morning of Palm Sunday and the Health Procession on the morning of Holy Thursday.

It owns four “mystery” thrones (depicting a scene from the scriptures, with more than one character), Ecce Homo (1944), “Little Donkey” (1961) Hosanna (2015) and Golgotha (2019), and five other thrones, Father Jesus of the Passion (2001), Our Lady of the Branches and the Rosary (2006), Holy Christ of Health (2018), Resurrected Christ (2020) and Our Lady of Sorrows (20th century). At present, the brothers wear a black robe with red buttons, a black velvet cowl and reversible cape in black-red velvet, black gloves, shoes and socks and a red cord belt. Board members can wear red velvet cloak. Its emblem is the red Cross of Jerusalem flanked by two golden palms. 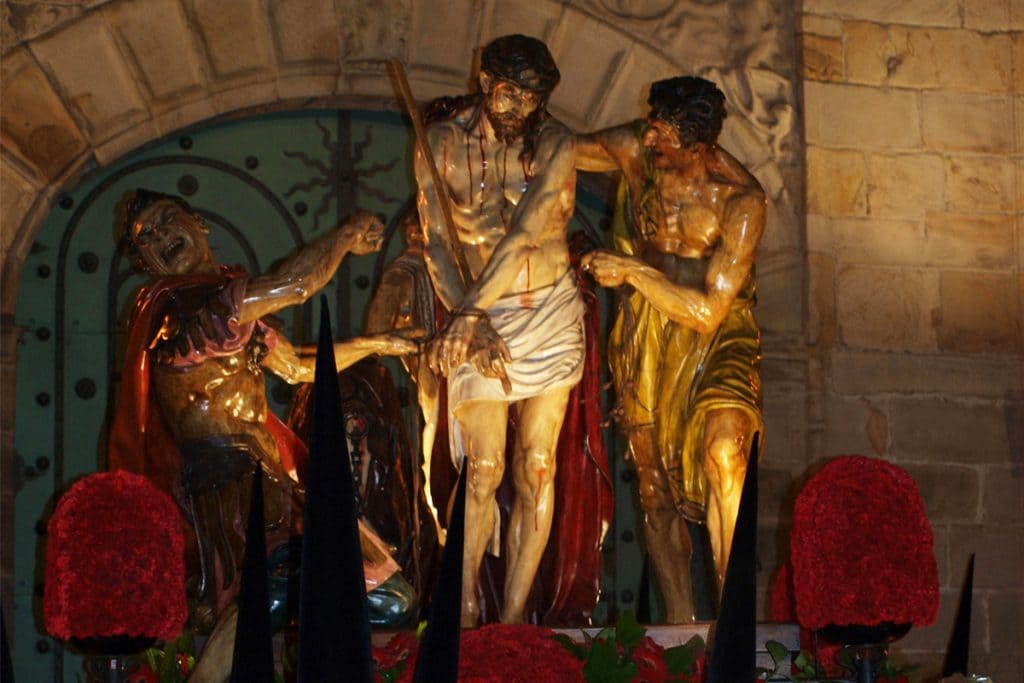 It represents Jesus presented to the people. It is composed by four carvings that stand out for their expressiveness, composition and anatomical study. The angels and dragons of the platform symbolize good and evil. It takes part in the Good Friday’s Procession. It is exposed in the Museum of Passion Floats. 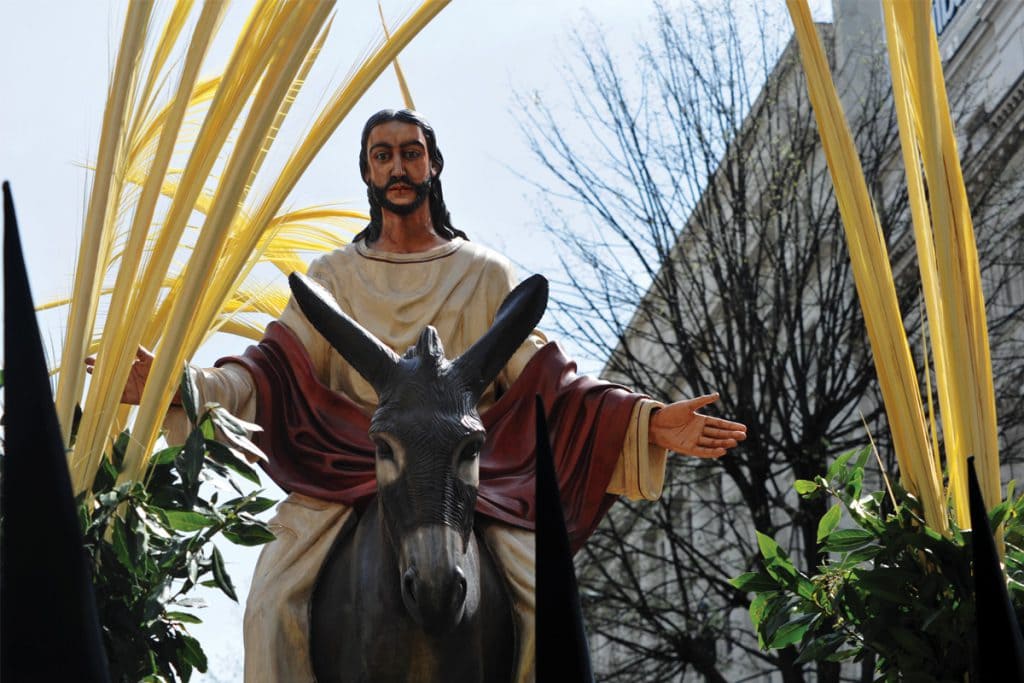 It represents the triumphal entry of Jesus into Jerusalem. Jesus, with open arms, rides a donkey accompanied by a little donkey. The passion float has four amphorae filled with palms at the corners. It took part in the procession on Palm Sunday until 2015. It is exposed in the Museum of Passion Floats. 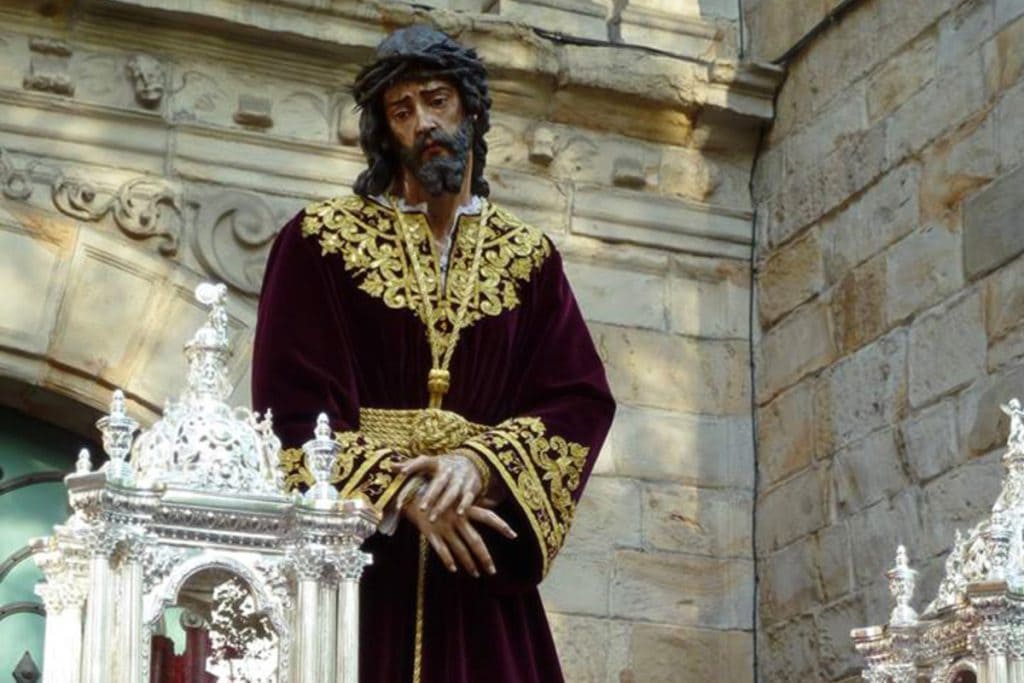 Father Jesus of the Passion

It represents Jesus tied and crowned on the way to the Praetorium. His humble face, hands and feet are remarkable. It takes part in the procession on Passion Friday and on Holy Thursday. It is carried on the shoulders of 22 brothers. It is exposed to worship in the church of Saint Vincent Martyr of Abando. 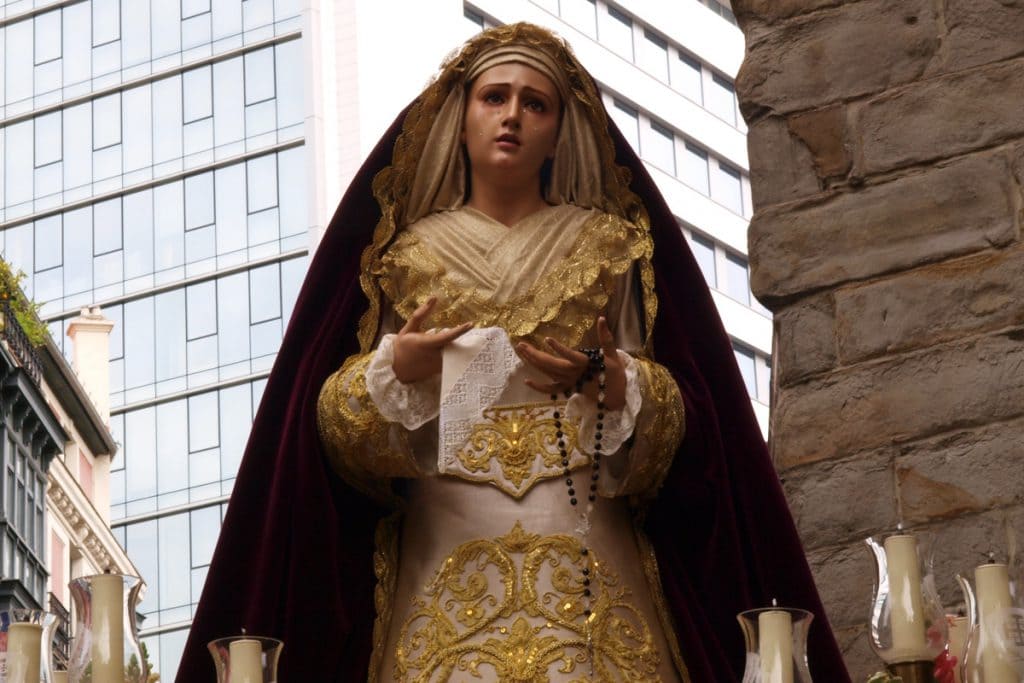 Our Lady of the Branches and the Rosary

It represents a happy, joyful and humble mother. His face and hands, which are carved from real cedar wood, with a rosary are remarkable. It takes part in the Palm Sunday procession accompanying Hosanna passion float. It is exposed to worship in the church of Saint Vincent Martyr of Abando. 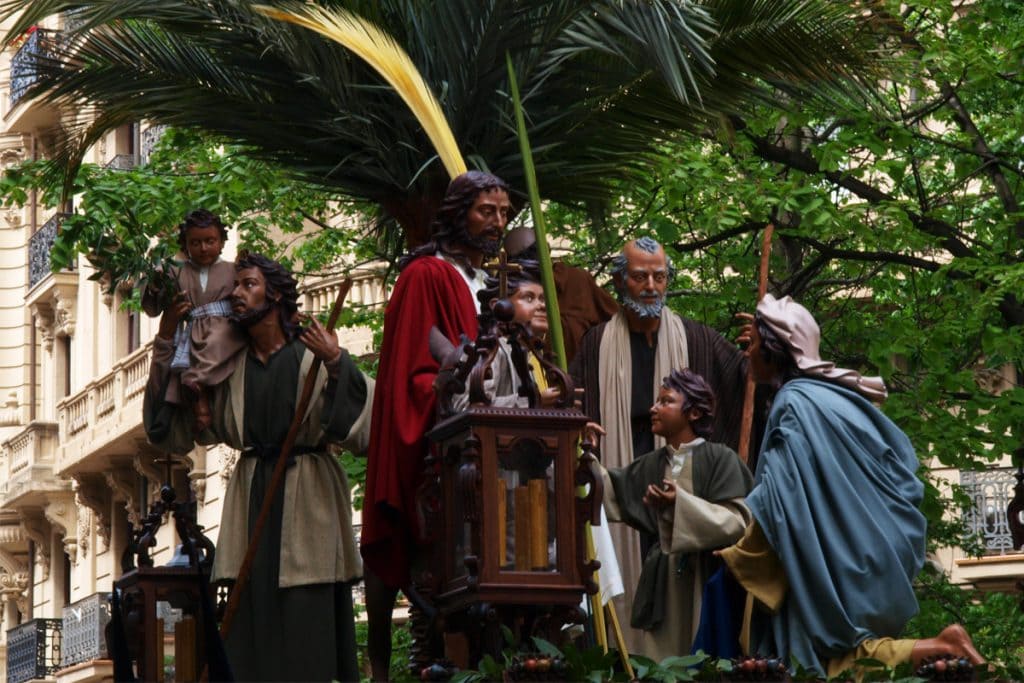 It represents Jesus on his entry into Jerusalem, mounted on a little donkey accompanied by the apostles Peter and John, a Hebrew woman and five children. The Renaissance-style platform is remarkable. It is carved from cedar wood. It takes part in the Palm Sunday procession. It is exposed in the Museum of Passion Floats. 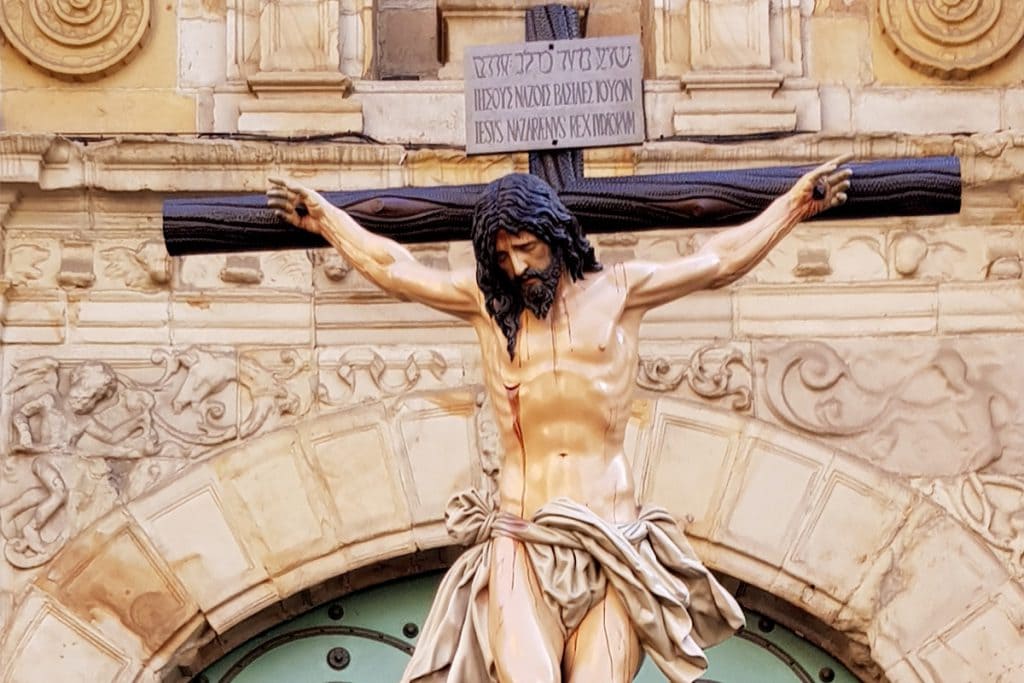 It represents Jesus dead on the cross. His anatomical study and his face is full of peace, comfort and humility are remarkable. It takes part in the procession on Holy Thursday morning. It is carried on the shoulders of 22 brothers. It is exposed to worship in the church of Saint Vincent Martyr of Abando. 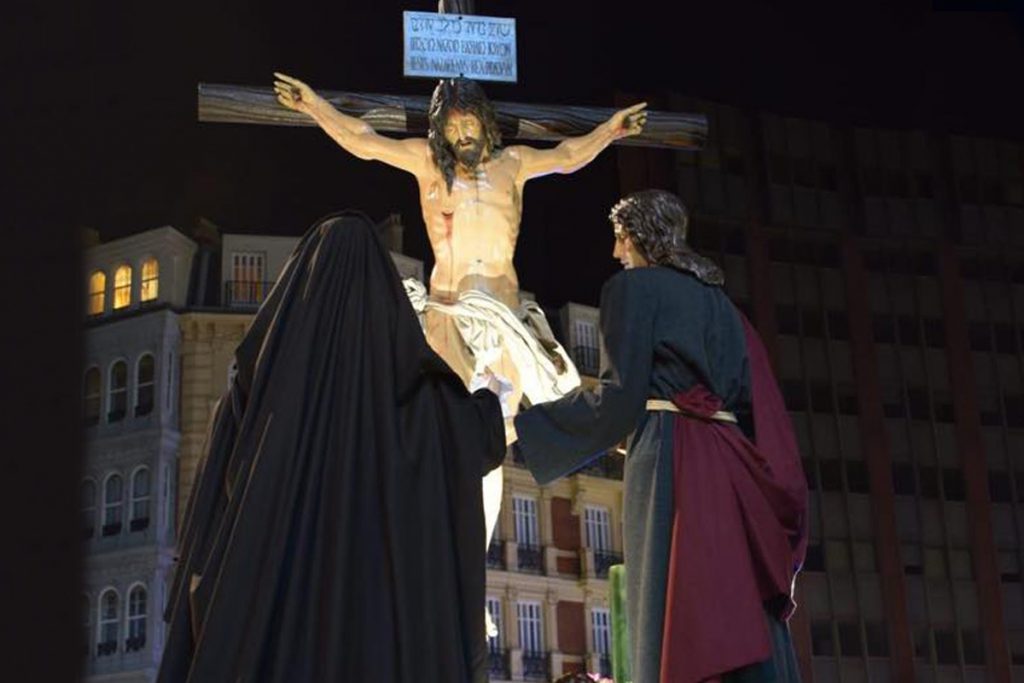 The main image is the Holy Christ of Health, which is accompanied by seven figures. In the front, there is a Calvary. At the rear, Joseph of Arimathea gives the permit to take away the body of Jesus to a Roman officer on horseback and two Roman soldiers draw lots for Jesus’ tunic. It takes part in the procession on Holy Friday in the afternoon. 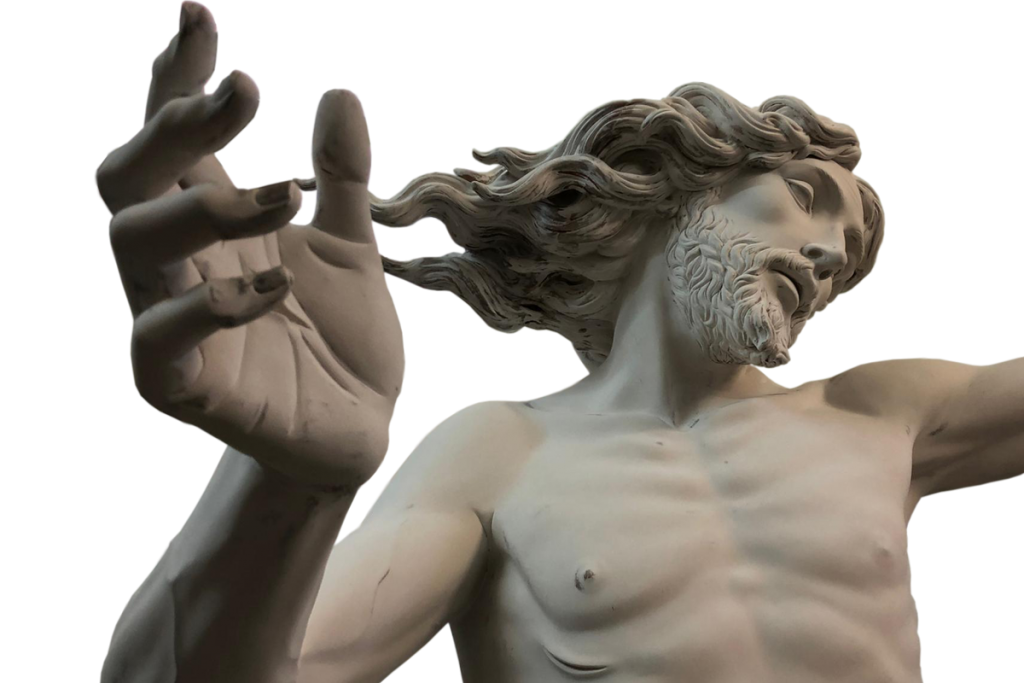 The carving is represented in an ascending attitude on a large cloth that surrounds it. The polychrome, mainly oil, is rich in nuances and recalls the polychrome of the 16th century masters. The image of Jesus presents Jewish features and has a great anatomical study. It takes part in the Easter Sunday morning procession. 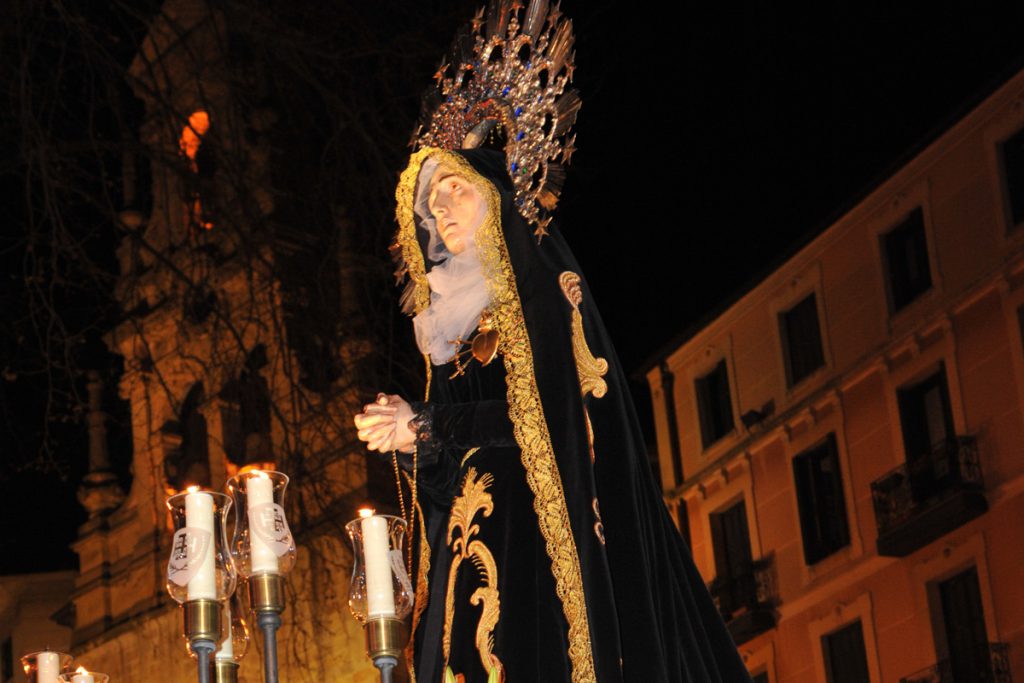 Our Lady of Sorrows

It represents Our Sorrowful Mother with her hands in an attitude of prayer. The carving is crowned with a white gold diadem and dressed in robes full of gold embroidery and rhinestones. It takes part in the procession on Passion Friday evening. It is exposed to worship in the church of Saint Vincent Martyr of Abando. 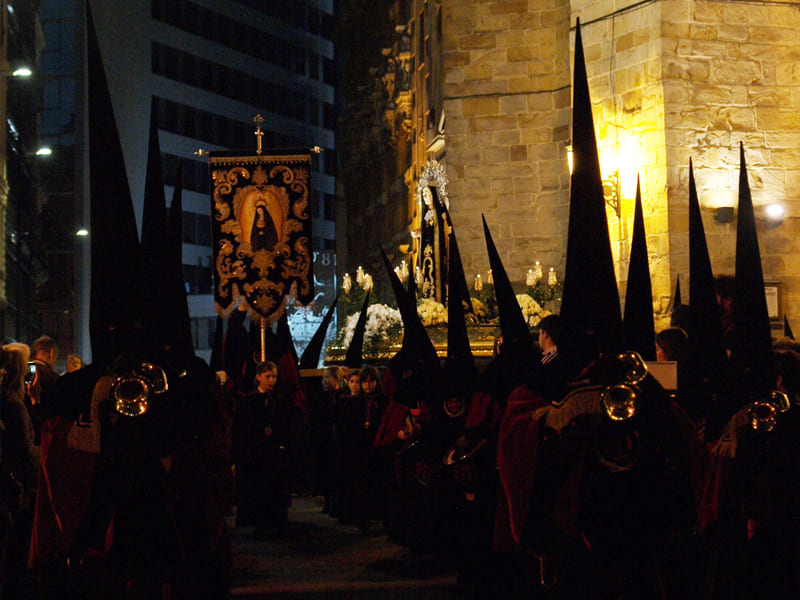 The Procession of the Virgin of Sorrows

It is the first procession of Holy Week in Bilbao and goes down the streets of the centre. Before 1941, this procession was organized by the Third Servite Order and was the culmination of the Novena in honour of the Virgin of Sorrows. After a break, it was recovered in 1994. 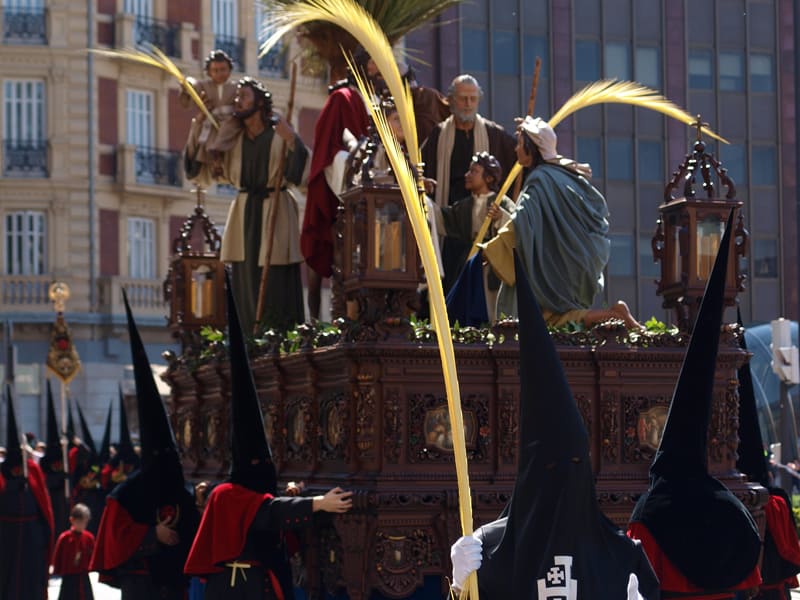 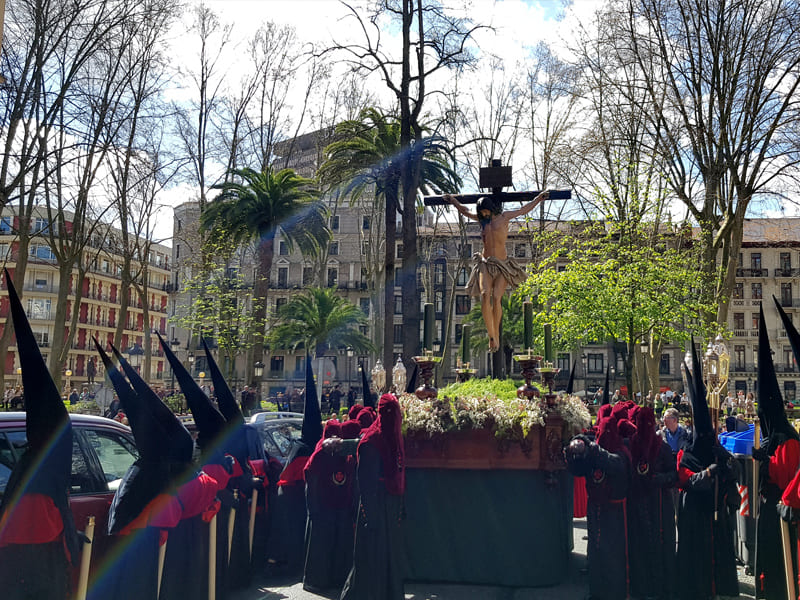 The Procession of Health

It was established in 2018. The main image is the Holy Christ of Health. The itinerary starts from the church of Saint Vincent Martyr of Abando and goes down the Albia Gardens. It is a good time to ask for the health of everyone and especially, of the sick.

HERE WE ARE
We use cookies to improve the experience on our website. If you continue to use this site, we understand that you agree with it.I AGREEPrivacy Policy